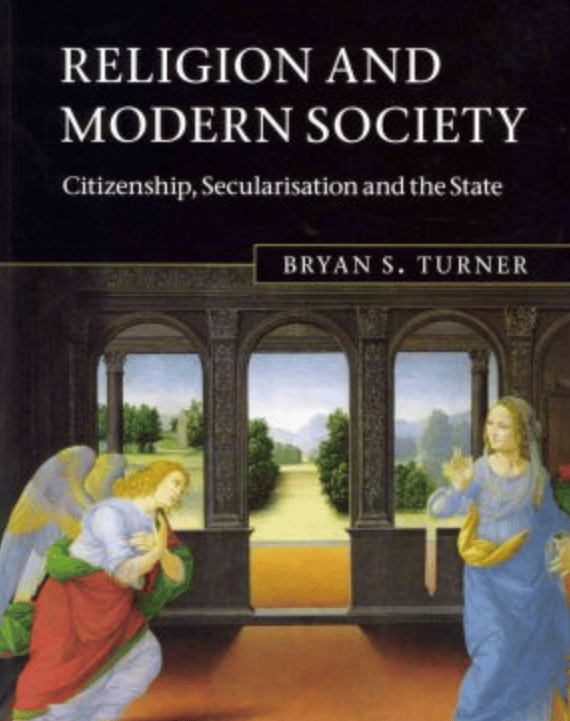 Religion and Modern Society: Religion is now high on the public agenda, with recent events focusing the
world’s attention on Islam in particular. This book provides a unique
historical and comparative analysis of the place of religion in the emergence of modern secular society. Bryan S. Turner considers the problems
of multicultural, multi-faith societies and legal pluralism in terms of
citizenship and the state, with special emphasis on the problems of defining religion and the sacred in the secularisation debate. He explores a range of issues central to current debates: the secularisation thesis itself,
the communications revolution, the rise of youth spirituality, feminism,
piety, and religious revival. Religion and Modern Society contribute to
political and ethical controversies through discussions of cosmopolitanism, religion and globalization. It concludes with a pessimistic analysis of the erosion of the social in modern society and the inability of new religions to provide ‘social repair’.
Religion and Modern Society: Bryan s. turner is the Presidential Professor of Sociology at the City
University of New York (CUNY) Graduate Center and Director of the
Committee on Religion, and Director of the Centre for the Study of
Contemporary Muslim Societies, University of Western Sydney, Australia.
He is a prominent figure in the field of the sociology of religion and editor
of The Cambridge Dictionary of Sociology (2006). In this Introduction, I outline some of the major issues in the contemporary sociology of religion and in the process offer a short overview of recent developments in the sub-field. Within this framework, I provide an interpretation of various key issues, such as secularization, the state and the regulation of religious life, youth cultures and spirituality, the complex relationships between the sacred and the profane, and the nature of religion itself. However, the major issues confronting any understanding of religion in modern societies are all related to globalization. Two obvious examples are fundamentalism and religious violence. Perhaps the dominant interpretation of these phenomena is that, with the massive disruption to traditional societies and economies, religious cultures provide the raw ideological material of violent protest. The violent secular groups of the 1960s and 1970s –the Red Brigade and the Baader-Meinhof – have simply been replaced by the jihadists of this century. However, my approach in this volume is to downplay the themes of religious violence and radicalism, looking instead at the development of religious revivalism and piety among diverse urban communities and the consequences of these pious practices for secular societies.